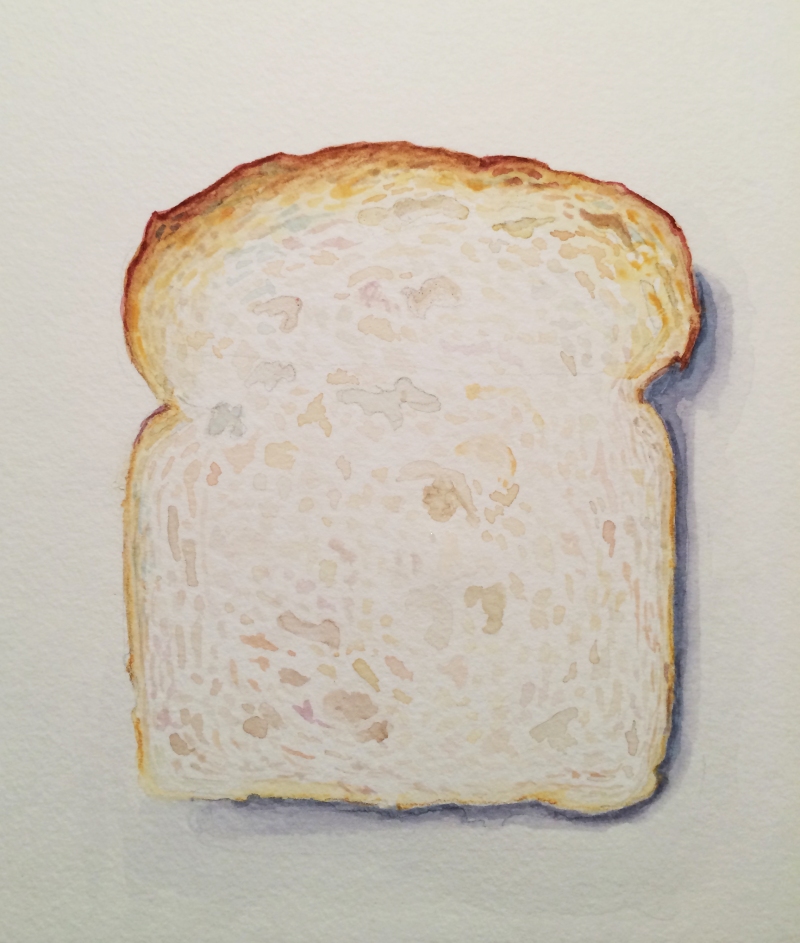 For the Love of Bread

I hope you’re sitting down. Because you may not be able to handle what I am about to tell you.

And then I made a meal out of bread.

Yes, I know. It’s carbs. It’s gluten. AND it’s gonna be your most easiest and favorite-ist thing to make from scratch and stuff your face with. 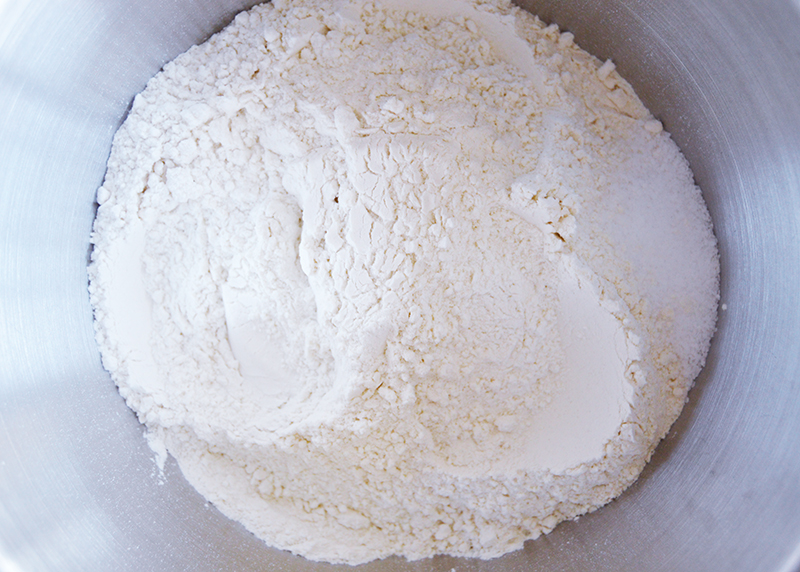 About a week ago I had to run ten miles. Not my usual exercise routine, but since my husband and I signed up to run a half-marathon, this has been my life. Running and sleeping and eating and convincing myself to put sneakers on and run some more. 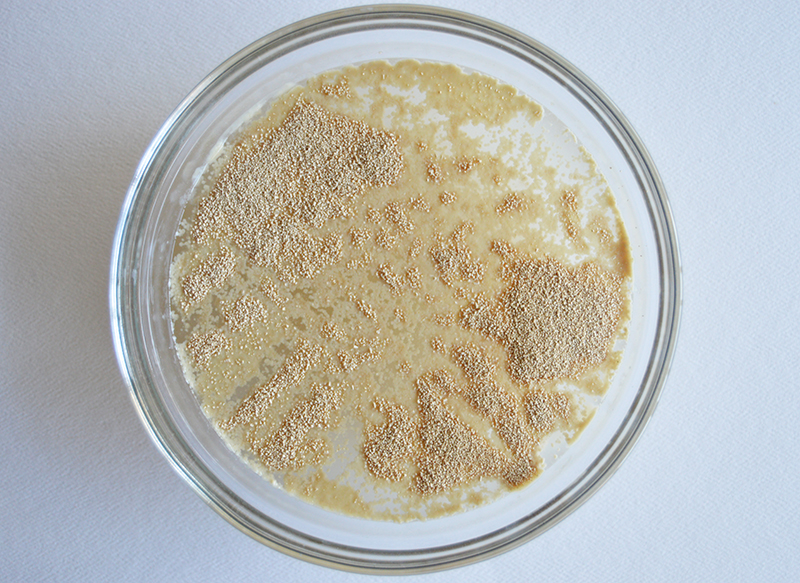 One upside to all the mileage I have been logging is the permission I have been giving myself to enjoy carbs, making me probably the only human in the history of running to run this much and not lose weight. 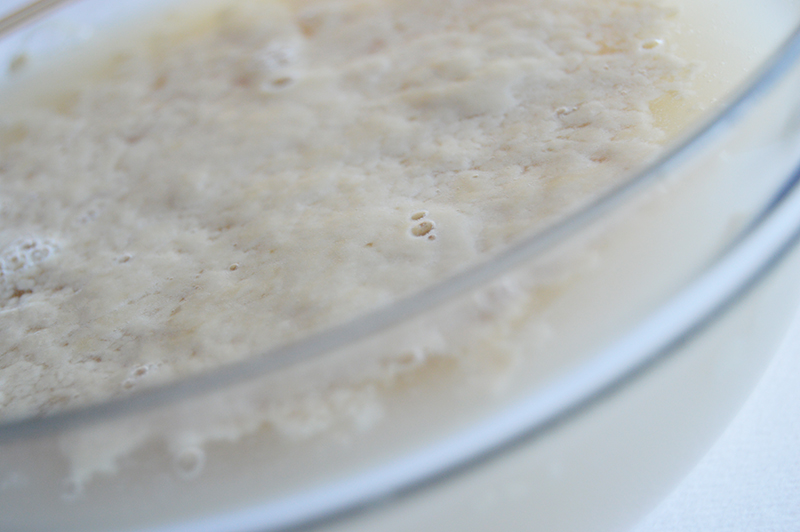 So when I limped home from the ten miles, despite having dinner prepared, all I really wanted was bread (with butter, obviously). 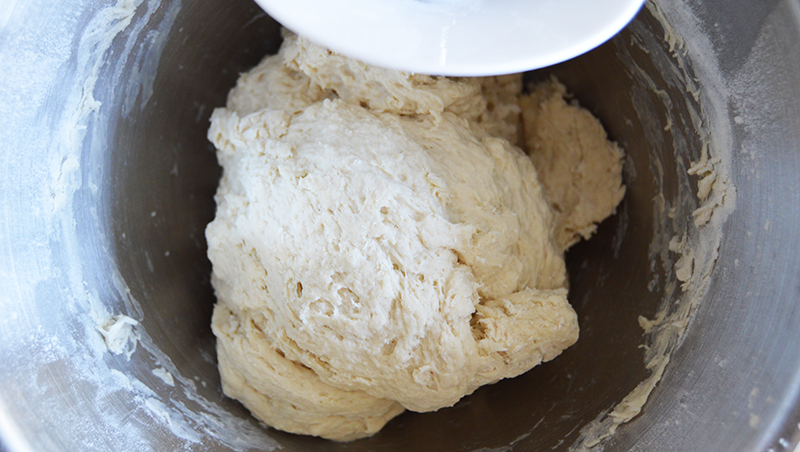 It gave me an idea. A wickedly awesome and delicious idea. 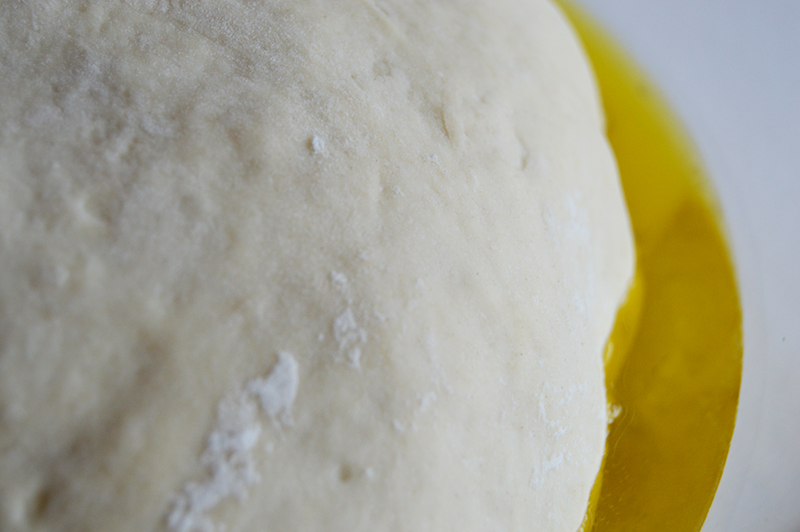 Combine the flour and the salt in the bowl of a stand mixer with a hook attachment. Pour the warm water into a small bowl and sprinkle the dry yeast over the water. A minute or two later, sprinkle the turbinado sugar over the yeast. 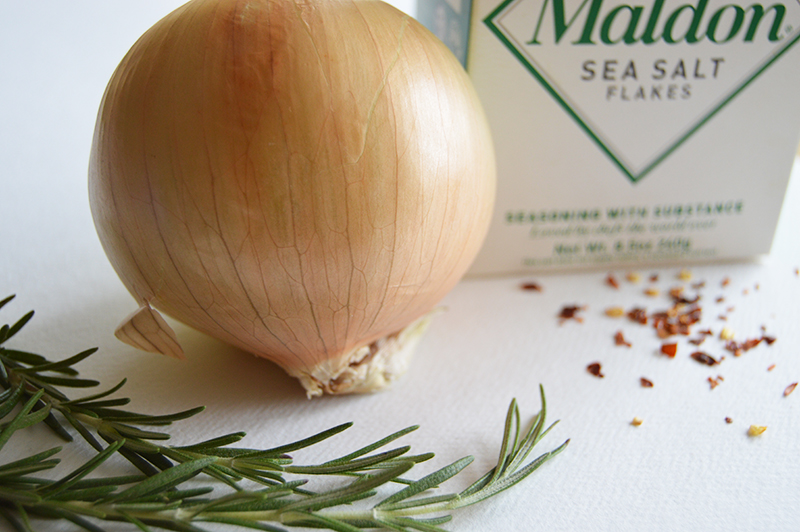 After the yeast blooms (it will bubble up and cover the surface of the water), pour the mixture into the mixing bowl with the flour. (There may be residual sugar left in the bowl. If so, just discard it.) Turn the mixer on medium speed, allowing the flour and salt to incorporate with the water, yeast, and sugar. 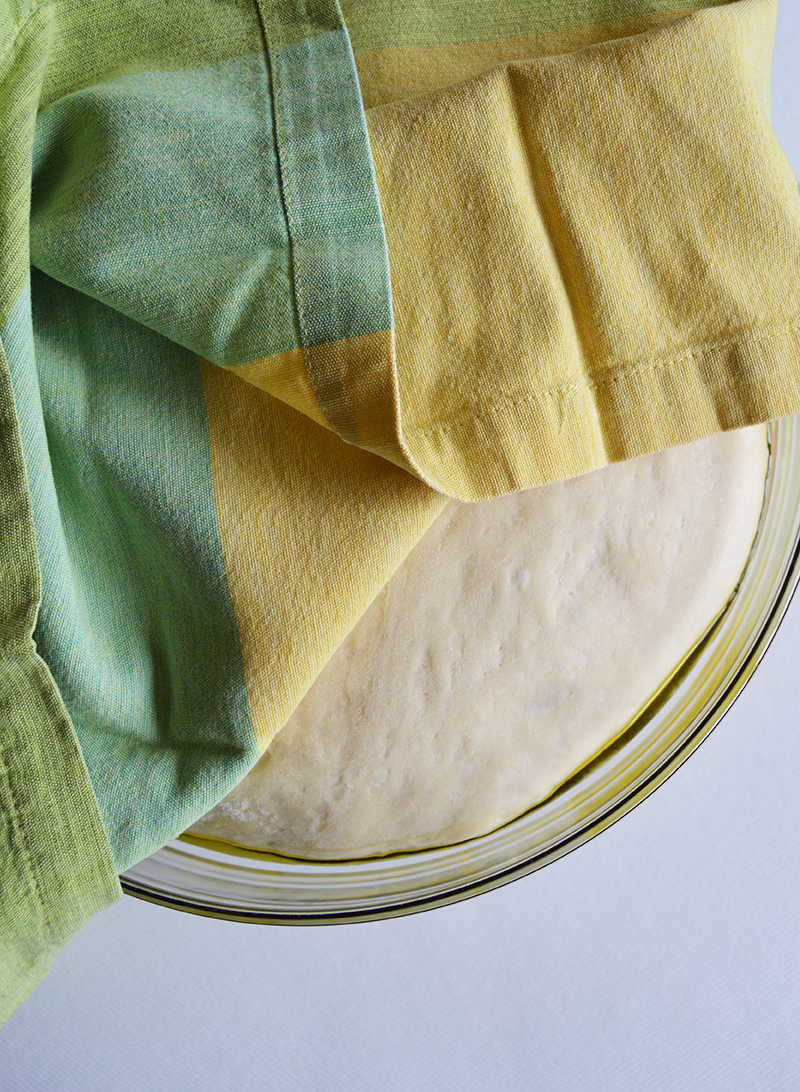 As the dough starts to form, pour the honey into the bowl as it is mixing. Turn the mixture on high and let the dough hook knead the dough until it forms a solid ball and separates from the sides of the bowl (about 3-5 minutes).

Pour the dough out onto a lightly floured surface, and knead the dough into a smooth ball with your hands. If the dough is sticky, knead in some more flour, but be careful not to work with it too much. Pour 1/4 cup of the olive oil into the bottom of a mixing bowl. Place the dough into the olive oil, cover it with a kitchen towel, and let it rise for an hour in a warm corner of the kitchen. 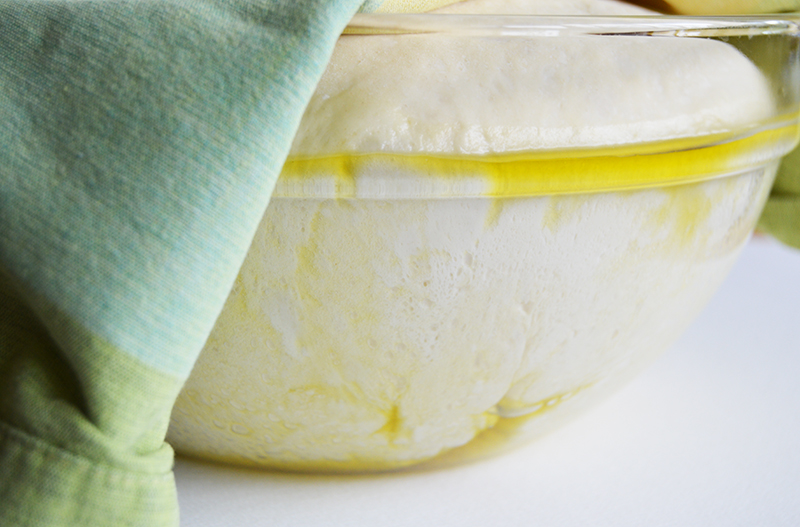 While the dough rises, sauté the sliced onion with a tsp of olive oil in a non-stick pan over medium heat. Allow the onions to become translucent and soft, then brown slightly. Toss them occasionally so they don’t burn. Set the onions aside to cool.

After about an hour, the dough should have doubled in size. Drizzle the remaining 1/4 cup of olive oil onto a large sheet pan or jelly roll pan (approximately 18″ x 12″ and about 1″ deep). Turn the dough and oil from the bowl onto the pan top side down.

This amount of olive oil may seem like a bit much, but I’m telling you, focaccia is like the oily bohunk of breads. It needs the oil. Using your fingers push and stretch the dough into the shape of the pan, creating an dimply surface. 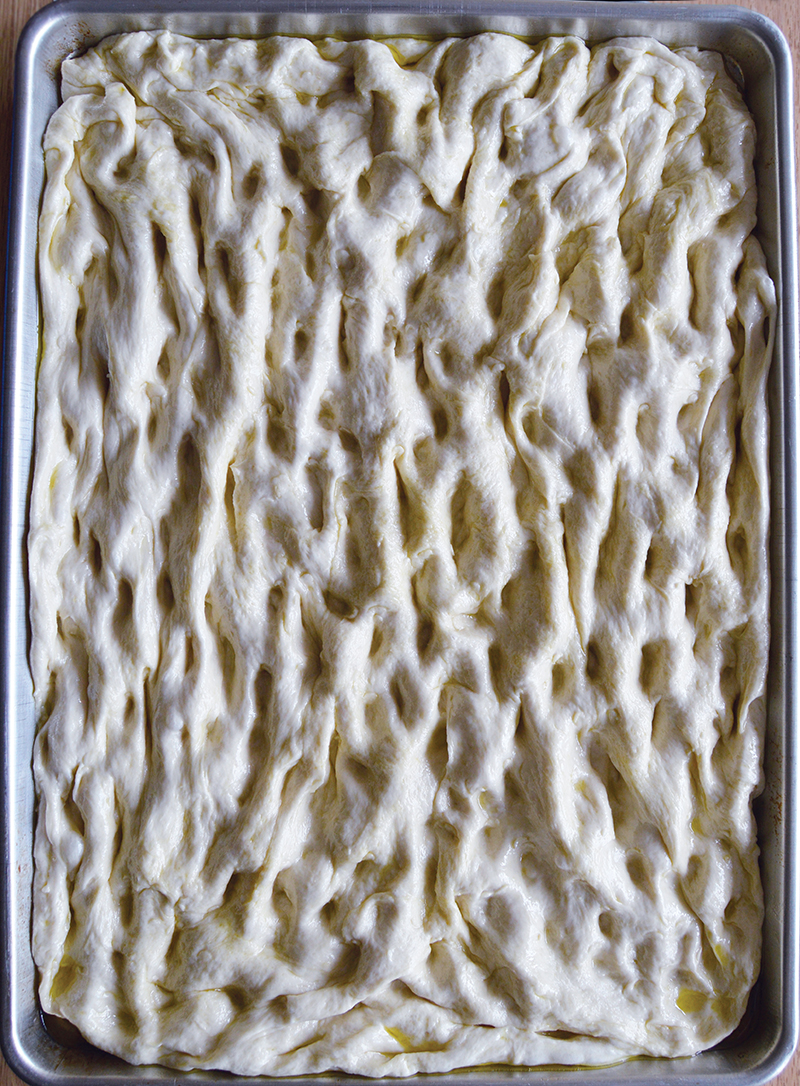 Allow the dough to rise a second time, uncovered in a warm place, for about an hour.

Preheat the oven to 425° F. Spread your toppings (onions, rosemary, red pepper flake, and sea salt) evenly over the surface of the dough. Press your fingers into the dough a second time, making sure to press all the onions into place, The surface should be very dimply and puffy at the same time. 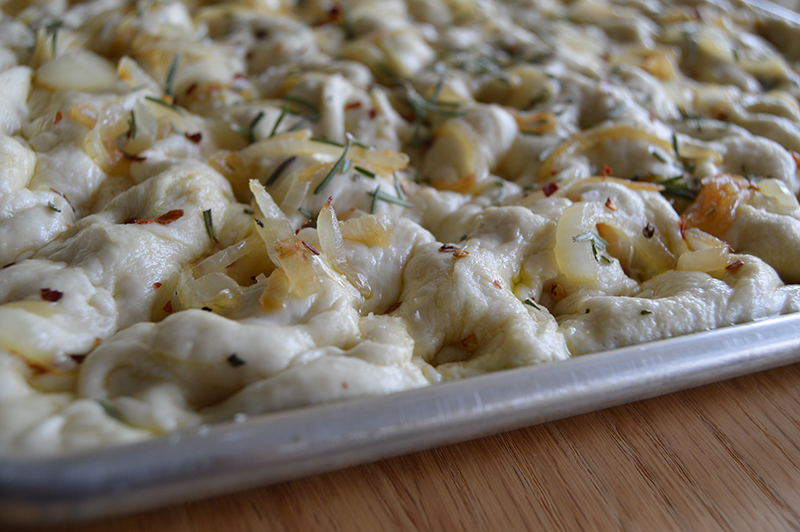 Place the pan of dough into the center of the heated oven and bake it for about 20-30 minutes, or until the surface of the bread is golden brown. 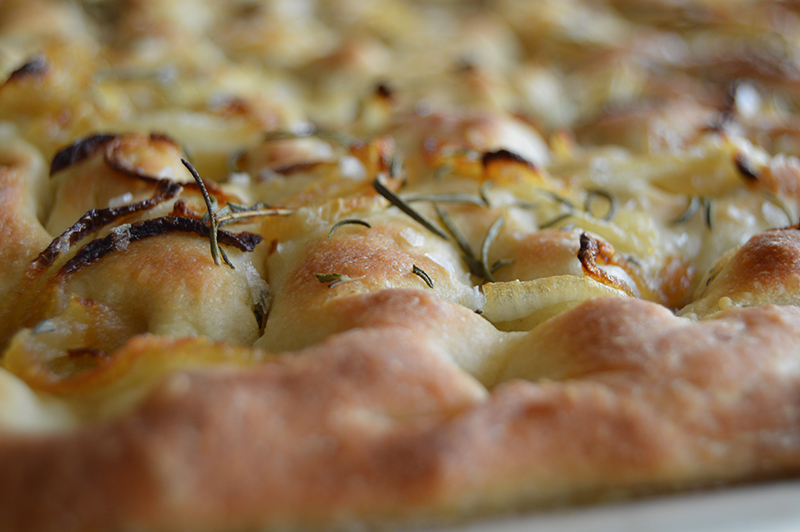 Carefully cut the focaccia into large slabs with a pizza cutter and enjoy! 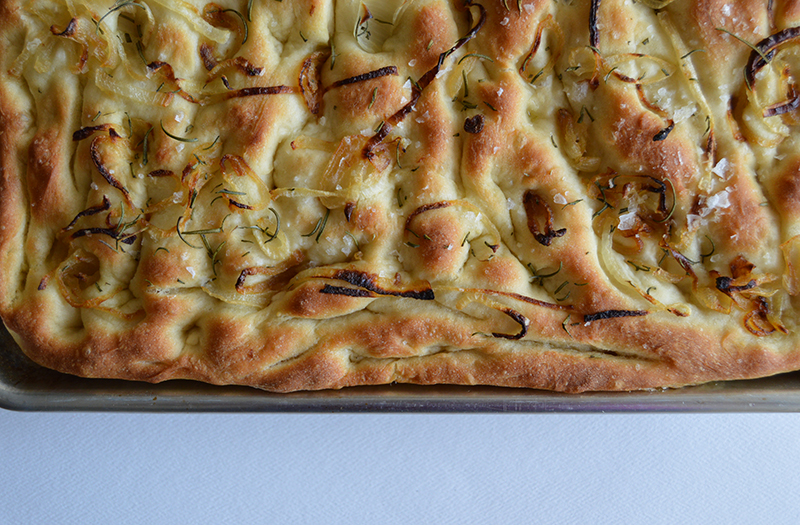 And everyone can calm down right now because I put a salad on top of mine. That’s totally a meal. 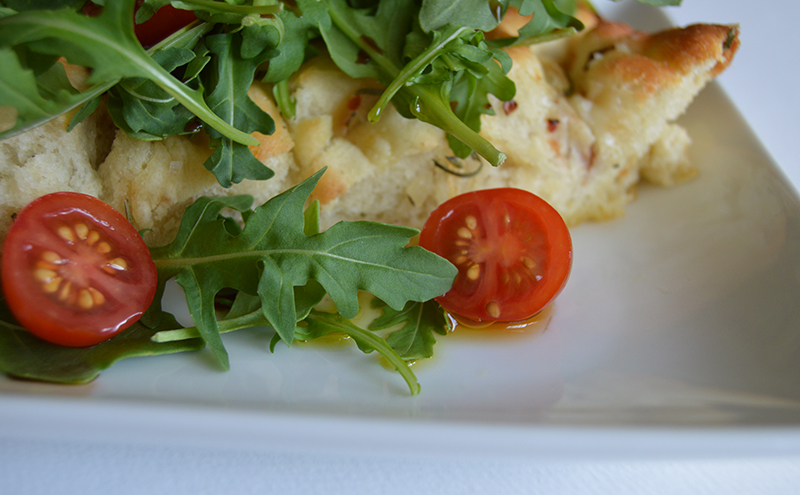 Older: Redemption of the Sprout
Newer: Breakfast of Champignons

4 thoughts on “For the Love of Bread”